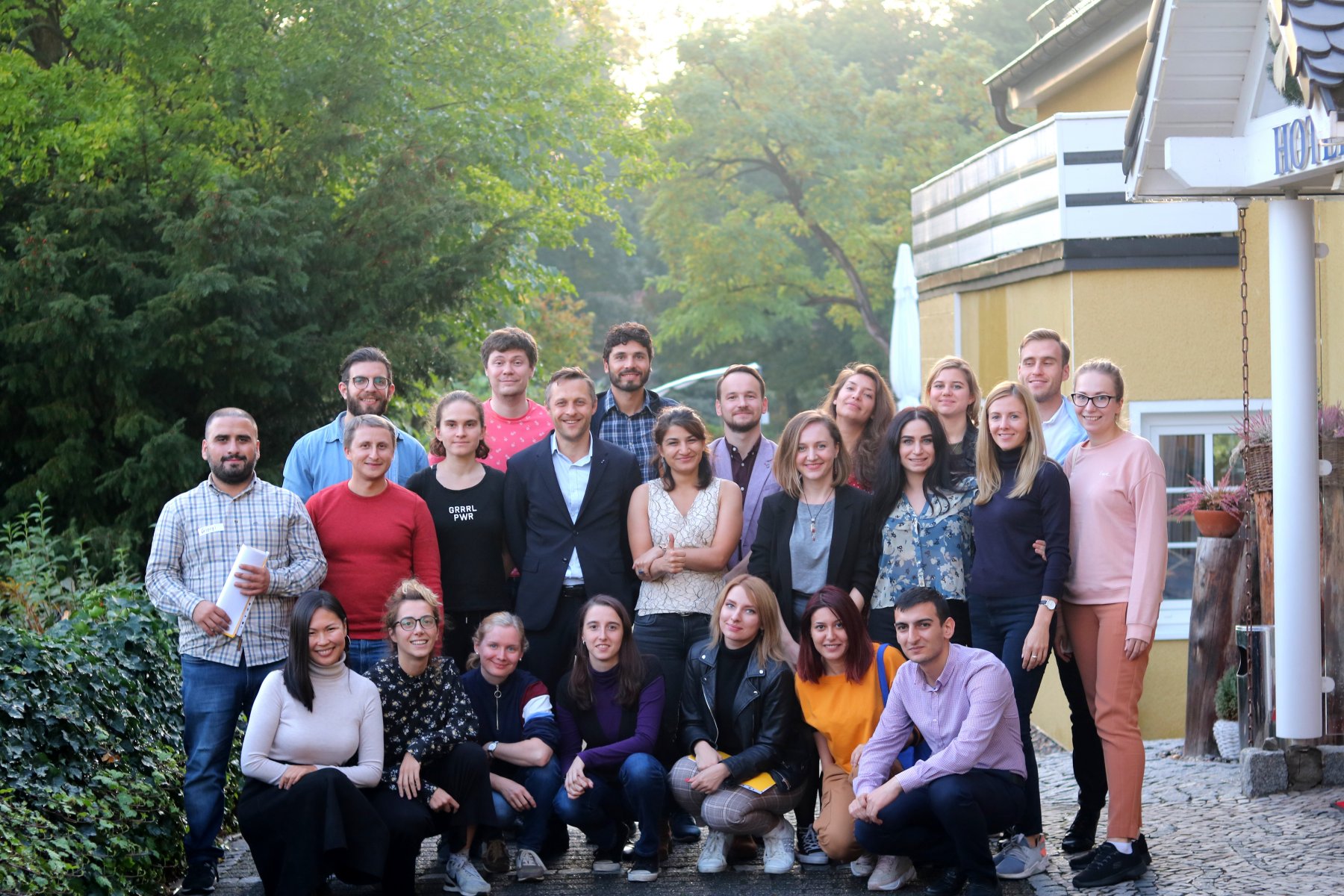 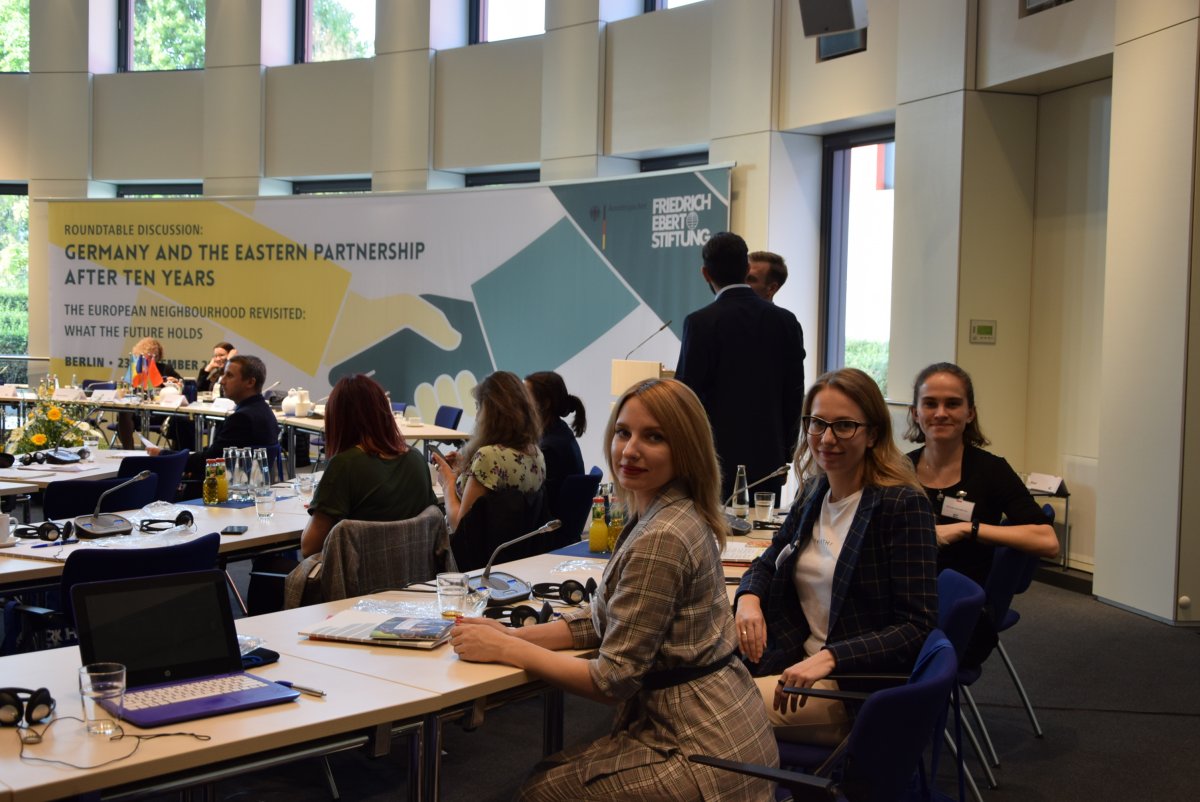 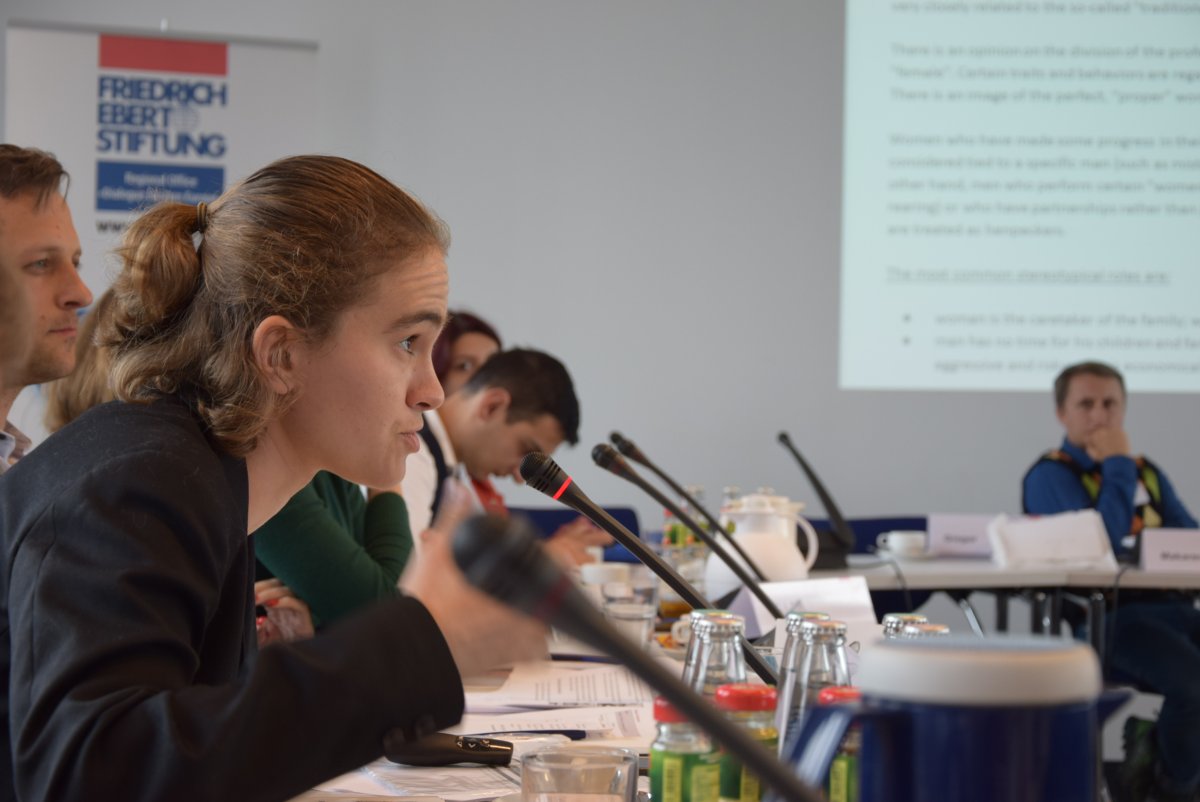 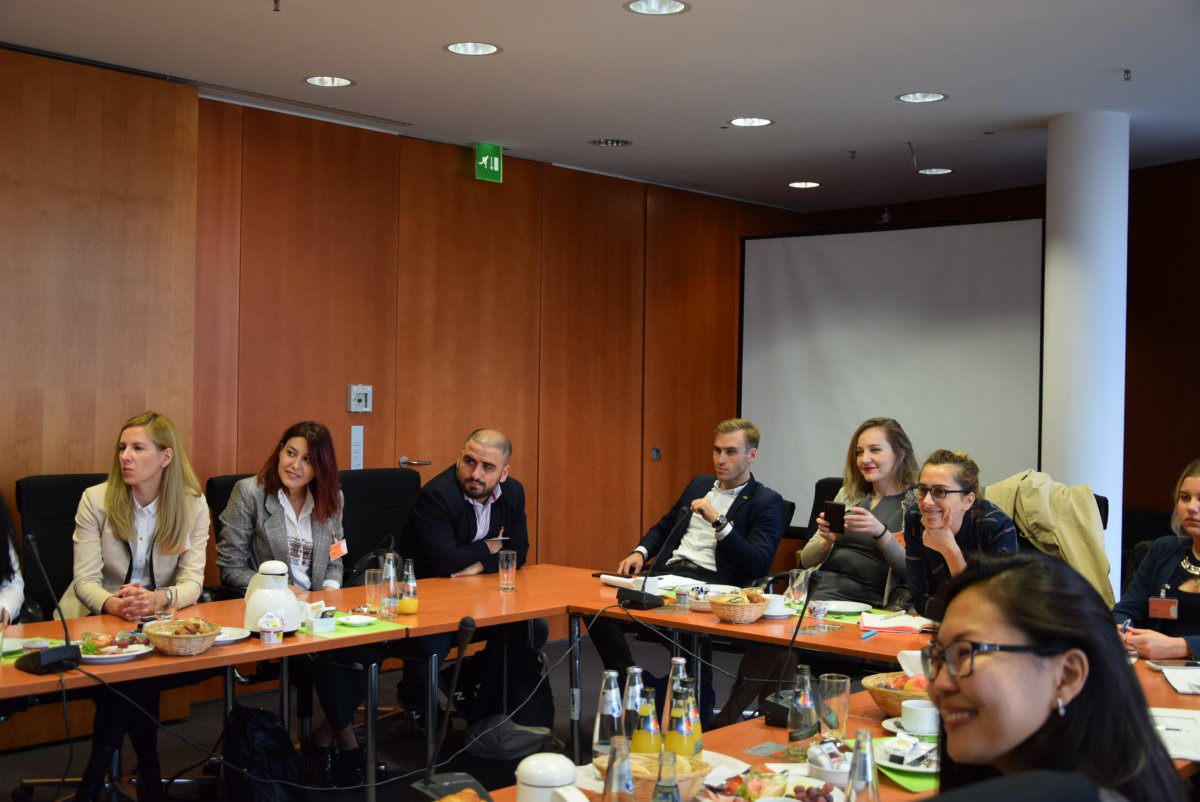 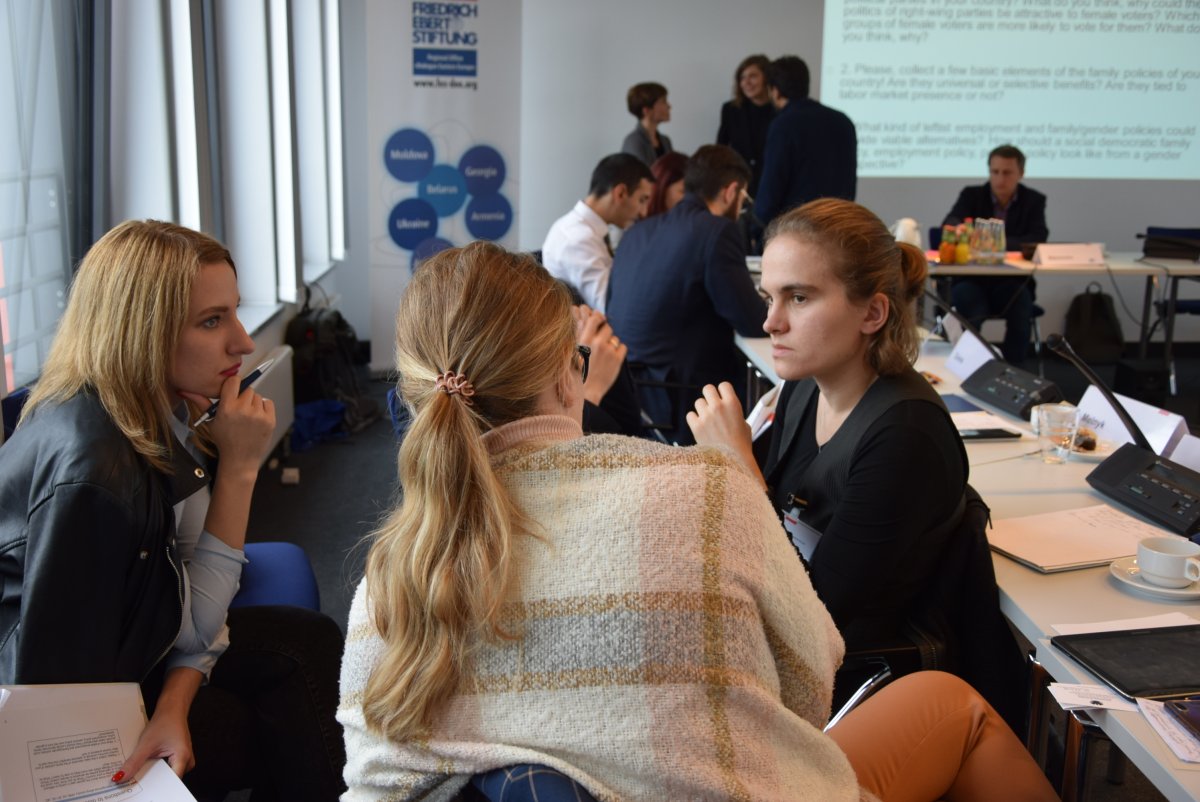 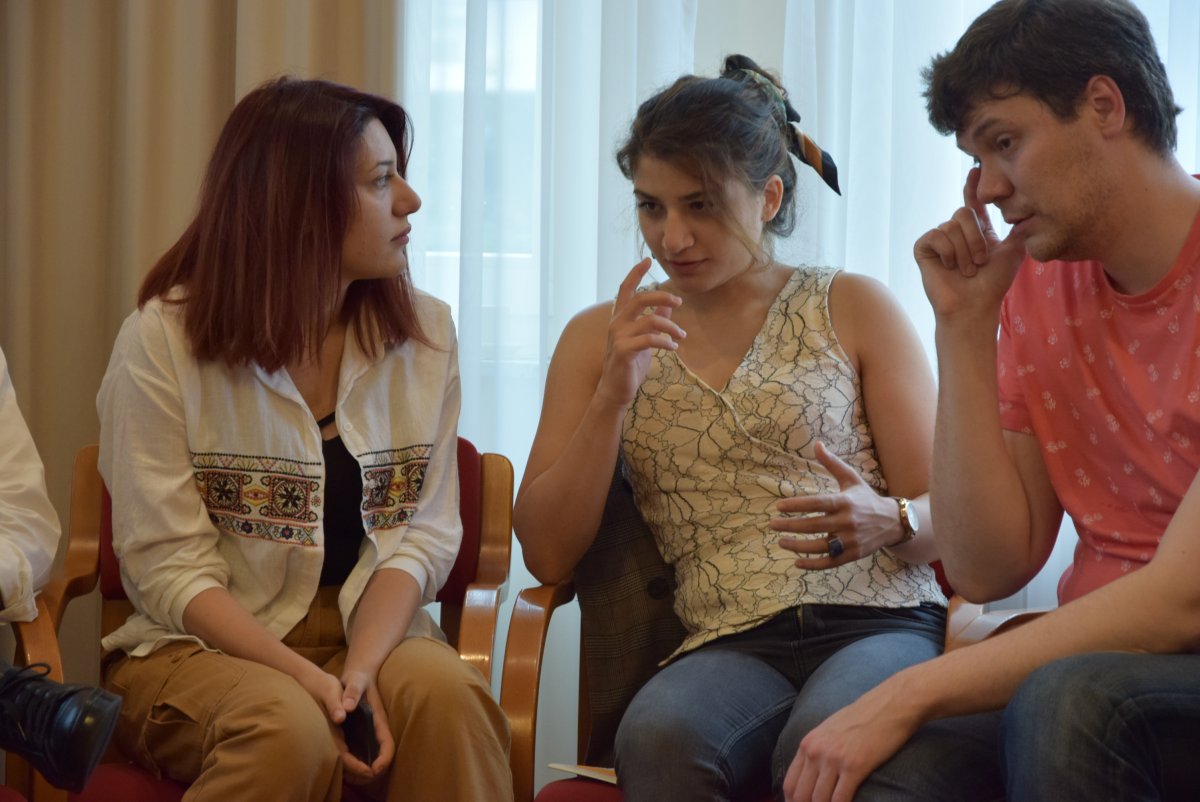 This year’s second academy for social democracy took place from 22nd to 28th September in Berlin and surroundings and tackled the issue of gender (in)equality in politics and society in the countries of the Eastern Partnership, Russia and Germany.

The academy started with a guided tour through political Berlin. In the afternoon, the participants took part in the roundtable discussion “Germany and the Eastern Partnership after Ten Years”, hosted by the Friedrich-Ebert-Stiftung in cooperation with the German Federal Foreign Office. Topics discussed included the Association Agreements of Georgia, Moldova and Ukraine with the EU and how to proceed on both sides without a valid membership perspective for the associated countries.

The second day started with an introduction to gender politics in Germany by Dr. Stefanie Elies, head of the division ‘Politics and Society’ at the Friedrich-Ebert-Stiftung. After that, Dr. Uta Kletzing, policy officer for gender and family policy at the division ‘Politics and Society’ of the Friedrich-Ebert-Stiftung, talked about the equal participation of both sexes in the political decision-making process and, in this regard, the need for a parity law, i.e. why a quota for women is needed not only in business, but also in (parliamentary) politics. In the afternoon, activists Vincent-Emmanuel Herr and Martin Speer put forth their idea of why all men should be feminists. Both are promoters of the HeForShe movement and according to their talk, it is often easier for men to convince other men of the importance to fight for gender equality than it is for women.

On the third day of the academy the participants got to talk to Josephine Ortleb and Johannes Schraps, MPs of the German Bundestag from the Social Democratic Party, on how to promote gender equality in the party and in parliament. In the afternoon, they took part in a workshop conducted by Anikó Gregor, Assistant Professor at ELTE University, Budapest, on the “anti-gender” phenomena, the economic aspect of gender inequality and obstacles which the gender studies face as a scientific discipline. She explained that gender equality is not (only) an individual experience, but a structural problem, and emphasized the often-neglected material or economic consequences of gender inequality: where the welfare state diminishes, it is most often women who step in to fill this gap, e.g. stay at home and care for their children, grandchildren or elderly parents, for whom they cannot find a place in a kindergarten resp. in a home for the elderly. A lot of family policies in several Eastern European countries are aimed at increasing the fertility rate and even further encouraging mostly women to stay at home.

During the last two days, the participants took part in an anti-bias workshop, facilitated by Constanze Schwärzer-Dutta and Dr. Prasad Reddy. The main goals of the training were to make the participants more aware their own biases, prejudices and stereotypes towards other people and to empower them in what they are and have and provide them with possible strategies to react to discrimination in their jobs and everyday lives, be it due to their sex, gender, ethnicity or nationality.

Too little, too slow

Why employees in Georgia, Moldova, and Ukraine do not benefit from the EU association agreements
Kiev, 2019

The Eastern partnership in 2030

Four scenarios for the future of the region
Kiev, 2019